More About Training (And There Will Be Still More --- Count On It!)

2014: Please note that there still are and will be still more training posts, but most of them on another blog. Check it out! 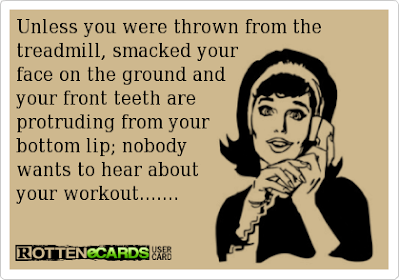 And I get it. I don't usually want to hear the details of other people's workouts, either, any more than I want to hear about how they studied for a physics exam or had some blood drawn or whatever.

That's why I don't often write about my fascinating (to me) workouts or spin classes. But lots of times we learn from other people's experiences, so I'm reading stuff I wouldn't have thought of reading in the past (for example, how Lance Armstrong used to train for the Tour de France, even though he's no longer my "hero").

With this in mind, I thought other people might be inspired, like I was, by the stories of some remarkable women in the early-morning spin class I take at my local 24-Hour Fitness Center.

See the photo of the smiling lady on the bike? That's Carole, who's among the 25 to 30 regulars in Derek's 5:30 am class every Monday, Wednesday, and Friday. I thought about this story when I heard what Carole and some of the other class members are training for: the STP (Seattle to Portland) two-day bike ride coming up in July. 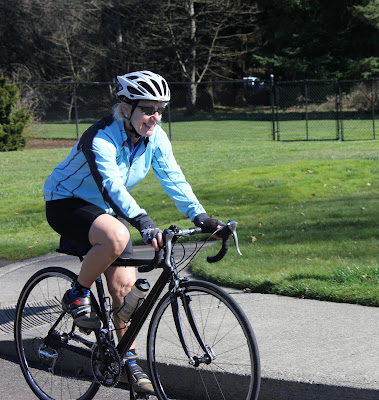 So I emailed my friend and journalism mentor Dean Baker, who writes for the Oregonian's Clark County weekend section, to see if he would be interested in writing about it. He replied, "I'm in Hawaii. Go ahead and pitch the story yourself. You can do it!" So I did it, and the editor took the pitch, and I wrote this story, which also appeared in print.

To do it, I interviewed Carole and Darla from the class, people from the Vancouver Bicycle Club, some Clark County bike shop and fitness club owners, and Derek and his wife Christie, who are both cycling instructors and personal trainers. I had to switch the focus of the story from the STP to the less famous Ride Around Clark County (RACC) because STP registration was full and anyway Clark County is the focus of these stories.

Meanwhile, Carole kindly took me on some bike rides around Camas and Vancouver, our own Mini-Rides Around Clark County, helping me get more comfortable on my new bike with the pedals that you clip your shoes into and showing me how to be comfortable on the road.

Of course I'm still training hard once or twice each week with Derek, in addition to the 5:30 cycling classes and boot camp classes two or three days a week and yoga and Pilates and swimming laps whenever I can stand to.

And I will be writing more about this, I promise. (So if you're like that Facebook friend of mine and don't want to read about it, don't read it. I won't mind.) 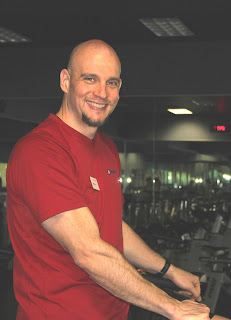 Here's one of the photos I sent the Oregonian but which they didn't use, and I don't know why.

Because, if you're choosing a personal trainer, isn't this the kind of person you're looking for?

It's not just the guns, it's the "You can do anything" attitude, the "Are we having fun yet?" smile, the ability to push his clients farther than they would ever push themselves until they figure out how to keep going even when they really really really want to give up.

This is what I'm learning: Yes, I can do it, and here's how I'm going to do it. So my training for the Huntsman* 140 is continuing in many different ways, not just physically but also mentally.

Part of the preparation will be riding in the Ride Around Clark County and Reach the Beach, both in May, so I can experience a couple of races/rides before that big one in Utah in June, so I can get used to riding with a bunch of other people in a big ride, and because I've got to get in the miles on the road, too. Oh, yeah, and Jeff is going to help me ride my bike at an elevation higher than our1,000 feet above sea level every chance we get between now and then.

I love it. I love hearing about your training. And I love that you wrote an article for the newspaper.

Very, very cool. And, for what it's worth, I enjoy hearing about your training and wouldn't mind hearing more. :-)

Some Books I Wish I Had Time to Read Again

It's just me, Aunt Louise.