I recently heard this piece for the first time in a poetry workshop. Yes, a poetry workshop, led by Clark County's very first Poet Laureate, Christopher Luna. He holds these workshops one Saturday every month, then offers free workshops at the Washington State University Vancouver Writing Center every Tuesday, too.

And even if only one person shows up, he holds the workshop. I know this because it has happened with me a couple of times.

Madame L wrote, "Madame L spent an amazing afternoon yesterday talking to a REAL poet, and she will write more about that experience, and him, sometime soon." 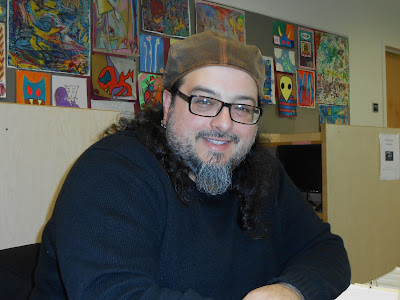 So, here it is: Christopher Luna and I sat in a cafe listening to a recording of John Coltrane's "Resolution" and wrote down whatever we felt  like writing.

I wrote a poem called "Resolution," about the way the chords and arpeggios in that piece interweave in a pattern of conflict followed by resolution. The poem isn't finished yet --- in fact, it's a mess --- so I'm not including it here. But eventually I'll figure out where I was going with it and bring it to resolution, and then I'll put it here or somewhere.

Meanwhile, I'm wondering if, when you listen to the song, you get the same sense of resolution.

Turns out Coltrane recorded "Resolution," part of his album "A Love Supreme," in 1964, "as a spiritual declaration that his musical devotion was now intertwined with his faith in God." The album is a record of Coltrane's "spiritual quest that grew out of his personal troubles, including a long struggle with drug and alcohol addiction." (This is from NPR.)

How does this stuff work, anyway?

I don't know, but I (or Madame L) will be writing again soon about Christopher Luna and real poetry and real poets.

Meanwhile, in case you didn't follow the link to the NPR article, here's another fascinating bit from it:

"The album is, in many ways, a reaffirmation of faith. And the suite lays out what you might call its four phases: "Acknowledgement," "Resolution," "Pursuance" and "Psalms." A Love Supreme has even spawned something of a religious sect. Reverend Franzo Wayne King is pastor of the Saint John Coltrane African Orthodox Church in San Francisco. The congregation mixes African Orthodox liturgy with Coltrane's quotes and a heavy dose of his music. Pastor King calls the album the cornerstone of his 200-member church.

"'When you look at the composition of titles and the sequence in which John has them laid out, we say that there's formula in that album. When he says, "Acknowledgements, resolutions and pursuance," it's like saying, "Father, Son and Holy Ghost." It's like saying, "Melody, harmony and rhythm." In other words, you have to acknowledge and then you resolve and then you pursue, and the manifestation of it is a love supreme.'

"While it's unknown whether Coltrane would have wanted to be worshiped or have his art deified, it's clear in every way that he saw A Love Supreme as much more than just another recording."
Posted by Aunt Louise at 4:05 PM

Some Books I Wish I Had Time to Read Again

It's just me, Aunt Louise.